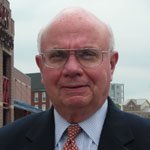 In & Around Food World
Dick Bestany
Well-known to generations of food industry people, Dick Bestany is the co-founder of Best-Met Publishing, publishers of Food World and Food Trade News. He served as the company's President from 1978 until 2007, when he took the position of Chairman Emeritus. His column was published every month from 1978 until 2016.

Safeway has been named one of the 2014 World’s Most Ethical Companies (WME) by the Ethisphere Institute. This is the fourth time and third consecutive year that Safeway has been recognized by Ethisphere for its commitment to maintaining superior business practices.

The Ethisphere Institute is an independent center of research, best practices and thought leadership that promotes best practices in corporate ethics and compliance and enables organizations to improve governance, mitigate risk, and enhance relationships with employees, business partners, investors and the broad regulatory community. For the past eight years, it annually selects companies from throughout the world for its prestigious WME list.

Safeway is an industry leader in principled business practices, environmental sustainability and effective community outreach. For the last three years, the company has been at the top of the US Greenpeace Supermarket Seafood Sustainability scorecard, a ranking of sustainability practices for grocers. In 2013, Safeway was named to the Dow Jones Sustainability Index North America for the fifth year in a row and to the Carbon Disclosure Project for the fifth consecutive year.

In February of this year, President Obama chose Safeway’s Maryland distribution center as the site of an announcement where he called for new fuel efficiency and greenhouses gas standards for medium-duty and heavy-duty trucks. The president praised Safeway saying, “By improving the aerodynamics of its trucks, investing in larger trailers, more efficient tires, Safeway has improved its own fuel efficiency. And the results are so solid that Safeway now encourages all the companies it hires to ship its products to do the same.”

The company’s significant community outreach and philanthropic initiatives include raising and donating millions of dollars annually to benefit a range of non-profits, including food banks, schools, cancer research centers and numerous organizations assisting people with disabilities. Collectively, those funds average $200 million annually. To view the complete list of the 2014 World’s Most Ethical Companies, please visit http://www.ethisphere.com .

And speaking of Safeway, Academy Award-nominated Viola Davis in conjunction with The Safeway Foundation and the Entertainment Industry Foundation (EIF) last month launched “Hunger Is,” a joint charitable program designed to raise awareness and funds to fight childhood hunger in the United States. The year-round campaign encourages individuals and communities to get involved in solving a widespread problem that too often goes unnoticed.

The program will provide Safeway shoppers with multiple opportunities to give during an in-store childhood hunger awareness fundraiser during the month of April at more than 1,300 Safeway stores across the United States. Funds raised through the initiative will be designated toward programs focused on eradicating childhood hunger and improving health-related outcomes. During the inaugural year, breakfast programs will be the focus, giving children a healthy start to their day and the best chance to excel.

Eight industry leaders will lead in-depth “leadership circles” on how to acquire and leverage influence at this year’s Network of Executive Women (NEW) Executive Leaders Forum, July 29-31 at the Terranea Resort in Los Angeles. More than 300 senior executives from the retail and consumer goods industry are expected to attend the invitation-only event. The executives include: Susan Chapman-Hughes, senior vice president, U.S. account development for global corporate payments at American Express, who will offer advice for “Creating New Opportunities for Yourself,” and Joy Chen, CEO of Yes To Inc., who will share tips for “Bringing Other Women to the Table.” Vicki Escarra, CEO of Opportunity International, will offer insights on “Influence: Leveraging: What and Who You Know.” Marissa Nelson, senior vice president of Ahold USA, will offer her thoughts on “Using Your Power to Transform the Organization.” Maria Lindenberg, chief procurement officer for Chevron Corporation, will discuss “Global Leadership: It’s Within Your Reach.” Jesse Spungin, chief marketing officer of K&N Engineering, will address “The Power of Servant Leadership.” Virginia Simmons, director at McKinsey & Co., will share her insights on “”Gender Diversity at the Top: Changing Culture, Moving Boundaries.”

The NEW Forum is open to invited senior-level industry leaders who are members of the Network. Contact your NEW Ambassador for details.

Wegmans Food Markets’ pharmacists are communicating with shoppers who don’t speak English through a service called Language Line Solutions. “Once it’s clear there is a language barrier, the pharmacist presents a simple card with several languages identified, and the patient/customer can point to his or her language.

“There is access to 200 languages,” explained Mary Ellen Burris, SVP of consumer affairs for Wegmans. Printed prescription information is also available in a number of languages.

Wawa Inc. and Sheetz, two of the country’s finest convenience store retailers, teamed up to provide more than 5,000 lunches to attendees at the commissioning ceremony of the USS Somerset in Philadelphia last month. The box lunches featured popular items from both company’s menus and were free of charge.

The commissioning ceremony is a time-honored tradition that marks a ship’s entry into the naval fleet. The vessel, currently moored at Penn’s Landing on the Delaware River waterfront, commemorates Flight 93 which crashed in SomersetCounty after the crew and passengers thwarted a terrorist attack on 9/11. It incorporates both a flight deck for helicopters and Osprey tilt-rotor aircraft, in addition to a well deck for landing craft and amphibious vessels. It can carry up to 800 U.S. Marines and sailors.

Recently I read an interesting article in Marketing Daily headlined, “More Guys in Grocery Aisles With Higher Brand Affinity,” reporting on a column in Defy Media’s second annual Acumen Report: “Brand New Men, tapping something over 2,000 men ages 18-49, suggests that men are becoming household helpers, perhaps as they are supplanted at work by women – a big change from household engagement meaning coming home for dinner now and then.”

“The study shows that men, as they become more involved with household duties, are also becoming more involved in shopping and brand choices. ……more than 65 percent of respondents said they now hold primary shopping responsibility for several household product categories, with 67 percent saying they enjoy shopping for the household and close to 63 percent open to choosing new brands.”

The study also showed that about 40 percent of men noted they became aware of a new brand from advertising and about 25 percent said they were apprised about a brand from a YouTube video, and about 28 percent from social media.

Our sincere sympathy is extended to the family of Michael Joseph Pastore, Sr., who died last month. Many of our readers will remember Mike, who along with his son Michael opened the Pastore Wholesale Grocers in 1966 in Baltimore’s Little Italy. Michael leaves his wife of 67 years, Dolores, son Michael and wife Maryann; and was the proud grandfather of Judge Nicole Pastore Klein and husband, Dennis; Michael J. Pastore II and wife Jessica; dear great-grandfather of Sienna, Naomi, and Page Klein and Sophia, Lucia, Michael III and Amelia Pastore. Michael was a gentleman at all times and was well known among the food trade in the Baltimore-Washington area. He will be missed. Any of our readers who would like remember Mike may make a contribution in his memory directed to St. Leo the Great Catholic Church, 227 South Exeter Street, Baltimore, MD21212.

Retired Giant/Landover EVP Dave Herriman commented, “Diana was a respected Giant associate. She took care of all of the many assignments that would arise in the office of a CEO. She was loyal, reliable, honest and a person who was always there when needed. Diana possessed that unique quality that enabled her to take charge of assignments and deliver expected results. She always had the confidence of the three CEOs under which she served. And, I think it’s appropriate to say that Giant’s success was because of people like Diana Hill.”

On a personal note, while she was a business associate, all of us at Food World called her a dear friend.