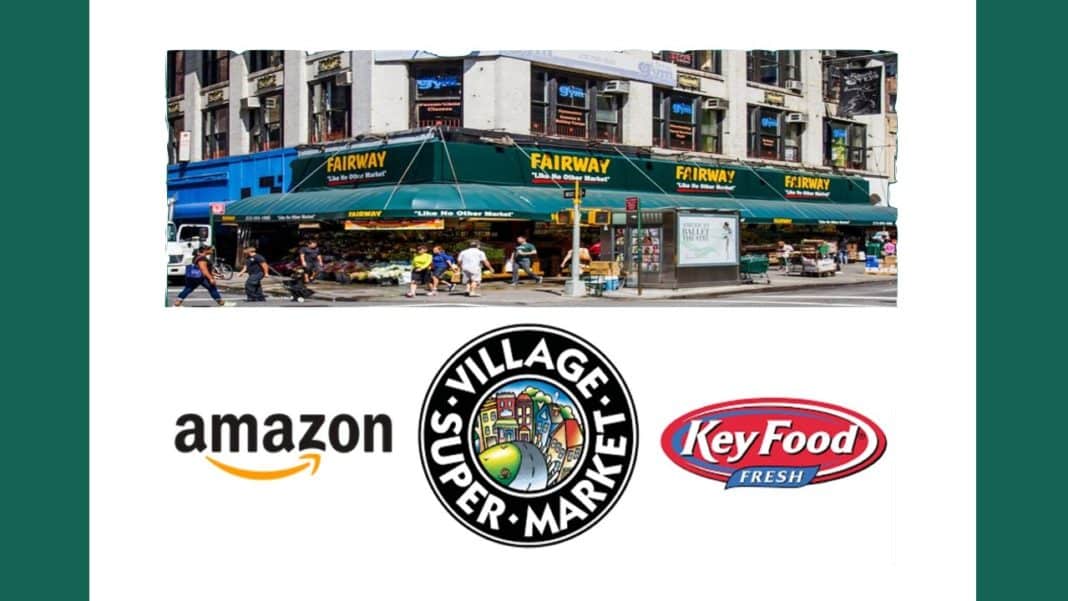 Village Super Markets, with a successful bid for five stores and the perishables distribution center (PDC), has emerged as the big winner in the auction to acquire stores from Fairway Market, which declared bankruptcy on January 23. The results of the auction were posted in a U.S. Bankruptcy Court document after 5:00 p.m. on March 25.

All told, there were three successful bidders for Fairway’s 14 stores including Seven Seas Georgetowne LLC, a Key Food member owned by brothers Paul and Pat Conte, who acquired the Ralph Avenue store in Brooklyn which Fairway opened in October 2019. The Conte brothers operate about a dozen stores in Manhattan, Brooklyn and Queens including three Food Emporiums (former A&P-owned stores) in Manhattan. The Ralph Avenue location was another A&P property (Waldbaum’s) that Fairway acquired at auction. The Bankruptcy Court considers the Village and Seven Seas acquisitions to be “going concern” deals.

Additionally, Amazon Retail LLC has purchased the real estate leases for the stores in Woodland Park, NJ and Paramus, NJ.

Village’s winning bid includes four of Fairway’s Manhattan stores (Upper West Side, Upper East Side, Chelsea and Kips Bay) as well as Fairway’s production and distribution center (PDC) in the Bronx for a purchase price of $76.2 million.  That differs slightly from its original “stalking horse” bid which included all five of Fairway’s Manhattan units (its Harlem store is not part of this deal, although the parking lot adjacent to that store was agreed to be purchased by Village). It does, however, also include Fairway’s Pelham Manor, NY unit (Westchester County) that both Bogopa and, reportedly, Amazon bid on.

Seven Seas’ winning bid for the Georgetowne store in Brooklyn was approximately $5 million.

Amazon’s successful bid for the leases in Paramus, NJ and Woodland Park, NJ was $1.5 million.

Bogopa, which sought to acquire six stores from Fairway as well as its PDC in the Bronx by making a late “overqualified” bid for $75 million, was shut out in the bidding process, although it was listed as back-up bidder for the stores and the PDC that Village is set to acquire.

And Amazon, which reportedly was interested in four stores – Pelham Manor, Brooklyn (Ralph Avenue) and the two New Jersey stores, was only successful in gaining control of the latter two units, although it was listed as a back-up bidder for the Ralph Avenue unit ($4.6 million for the lease only).

Fairway Market said it will continue to serve its communities by operating all of its stores, including stores not sold during the court-supervised auction, and intends to do so for the foreseeable future to accommodate the current public need for our products.

“We are pleased with the outcome of the auction and are grateful for our dedicated and hard-working employees, suppliers and distributors during this process which has taken place in these unprecedented times,” said Abel Porter, CEO at Fairway Market. “Serving our community has always been our top priority and we remain committed to providing quality items and a safe shopping environment for our customers and our employees during this global health crisis.”

According to court documents, 38 parties offered bids for the high-volume units.

According to the March 25th filing, a hearing to approve the sale will be held on April 14. The deadline to object to the proposed sales transactions is April 1.

Additionally, concerning any unsold stores, the Bankruptcy Court document noted that if Fairway (and its debtors) determines to open up a new bidding process for parties which have not been the subject of an offer to purchase accepted by the sellers and the affiliates owning the assets of such supermarket as of the conclusion of the auction, “sellers shall provide buyer with prior written notice of such determination.”