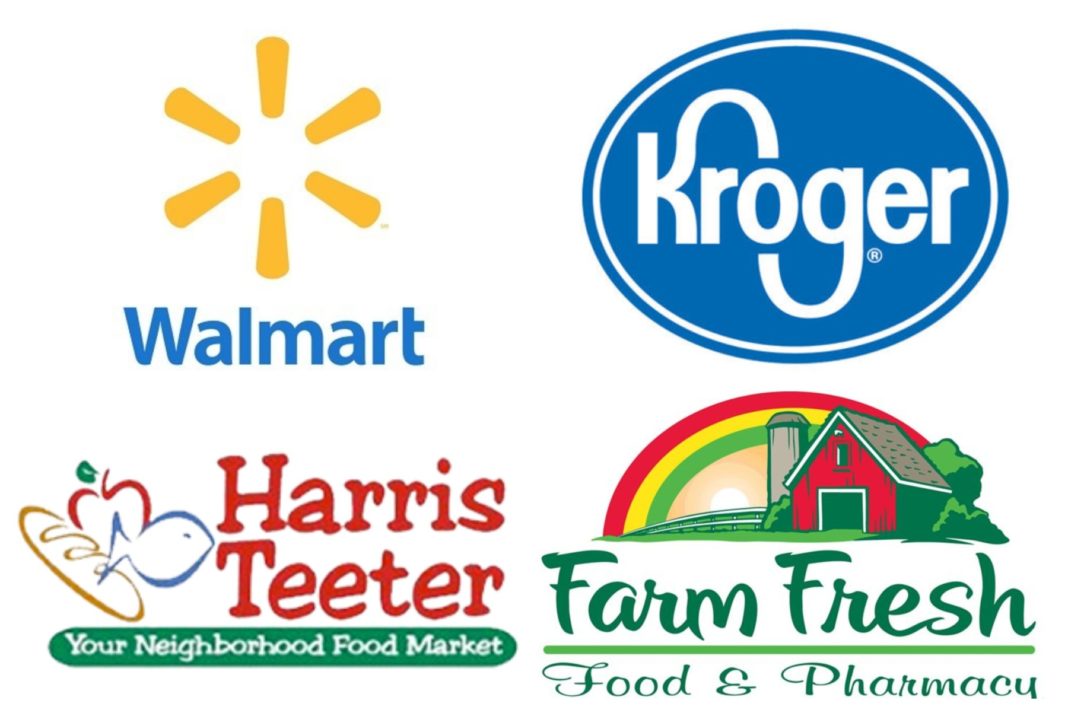 The Richmond-Norfolk market continues to be the most dynamic and competitive area in the entire Mid-Atlantic region. The reason is obvious: established powerhouse retailers that compete against each other (Walmart, Kroger, Wegmans, Food Lion) coupled with other new deep-pocketed merchants that are trying to gain traction in a market that’s had a lengthy history of being overstored by retailers with divergent operating styles.

And for good measure to stir the pot further, add the withdrawal of two retailers over the past couple of years – Farm Fresh (in Tidewater) and Martin’s (in Richmond), both of which once led their respective markets in sales.

In Richmond, the big story this year is that Walmart regained the top spot in the Old Dominion’s capital, nudging past last year’s leader, Kroger which had topped the Behemoth by 1/100th of a percent point.

It wasn’t that Kroger had a bad year by any means. In fact the Richmond market (part of Kroger’s Mid-Atlantic division) remains one of the mega-merchant’s best units. However, the opening of three new Publix stores in the eight-county market adversely impacted Kroger more than it did Walmart, which also benefited from better execution at store level (including reducing out-of stocks and slightly improved perishables) and its link to its online offerings (“ship to store” and delivery).

And while Publix certainly served as a market disruptor to some degree, the most profitable grocery chain in the country has fared disappointingly in its nearly two years in the Richmond market.

Lidl, which was also seen as another market changer has not yet found the sweet spot. Along with its strange merchandising ideas and sub-par perishables, the German discounter, which sought locations close to established discount competitors Aldi and Walmart, still operates the same six stores in Richmond that it did a year ago.

As for the Tidewater market, Food Lion with its 82 locations still leads but Walmart with only 30 units continues to press them. Food Lion even expanded its base this year with the acquisition of three Farm Fresh units and upgraded its stores with its “Easy, Fresh & Affordable” remodeling program, but Walmart with its SuperCenter dominance, continues as the dominant per store average operator in the market.

The pullout of Farm Fresh, a major factor in the Tidewater area for more than 60 years, created opportunities for virtually all retailers in the $5.2 billion market. Harris Teeter (10 stores) and its parent, Kroger (eight units) were the most aggressive buyers in the store selloff that was engineered by then-parent company Supervalu (now UNFI). Also benefiting was Aldi which opened six new stores in the market and helped neutralize Lidl whose sales declined in its second year. Walmart also got dose of Aldi’s sales power as well.

What wasn’t measured in this year’s market study was the impact of the first Wegmans store in Tidewater which debuted in Virginia Beach on April 28. That store is already doing a land-office business and will be measured in next year’s study.

So, here’s Big Duke’s take on the Richmond-Norfolk operators and how they fared over the past 12 months.

Walmart – This is the first year since Walmart entered the R-N market in the early 1990’s that its store count decreased. The Bentonville Behemoth closed an underperforming Neighborhood Market in Chesterfield County and continued its recent practice of focusing on digital investments rather than brick & mortar expansion. Still, the world’s largest retailer continued its tenacious focus on price while also improving its in-stock conditions. Store morale also improved. While the continuing market overstoring led to little upward movement for almost all retailers, taking share away from Walmart is almost impossible.

Kroger – By all standards, a very solid year made better by its store acquisitions in Tidewater which boosted its sales and share in that that market. Richmond was more of a grind due to the gridlock that continues in the capital region. Kroger is well-positioned in both markets to be an important player for many years in both markets, but with will clearly need to add more stores if it wants to move further up on the leader board.

Food Lion – I guess parent Ahold Delhaize USA does really care about its semi-discount division. Cap-ex was spent to improve its stores and add more perishables and its store count actually grew this year for the first time in nearly 15 years. Food Lion even unveiled a new prototype and with its massive store base in the region, is once again taking advantage of the convenience factor it enjoys. Big Duke is impressed by the way the Food Lion has stepped on the accelerator to take advantage of its strengths in two highly competitive and diverse markets.

Harris Teeter – Although there are no stores in Richmond, HT became a much bigger factor with six more stores operating this year in Tidewater (and another three in the Charlottesville). The Wegmans store in Charlottesville which opened in 2016 has impacted Harris Teeter, and Wegmans recent Virginia Beach debut will have a significant effect, too. But the company does an excellent job of being a consistent upscale merchant that its customers can count on for service and perishables.

Publix – Big Duke remains baffled. Three new stores in Richmond with several more to come (plus new units in Fredericksburg and Williamsburg) and Publix refuses to change its game. The stores remain clean and offer strong customer service. However, retail pricing is higher than almost everyone in the market; its perishables, especially prepared foods, are mediocre at best. Most trade observers expected more especially since Publix knew that Kroger and Wegmans would be daunting supermarket challengers and Walmart is just plain tough. We know Publix has a big bank account and lots of patience, but waiting for the consumer to eventually circle back to Publix isn’t going to work in Richmond in 2019. You don’t get a second chance to make a first impression.

Aldi – An excellent year for the value operator, not only in Richmond-Norfolk but nationally. In Big Duke’s opinion, nobody understands and executes discounting better that the successful German merchant who entered the U.S. in 1976. From store design, to ease of shopping, to vendor sourcing, to on-shelf merchandising and of course, pricing, Aldi deserves the gains it has achieved over the past several years. With its remodeling program well underway, featuring a slightly larger footprint to accommodate more perishables and a rapidly expanding national footprint, Aldi is positioned to be a major disruptor for years to come.